Martin Fierro, in Liliana Romero and Norman Ruiz’s animated film, is a gaucho, which is what the South Americans call a cowboy. Cowboys had to be hardy people and had to have plenty of skills to survive as there were few resources and little food. Cowboys back in the day often had a reputation for being bad people but they were not bad, they were just survivors. If you are fascinated by cowboys, then you are going to want to keep reading as we take a closer look at the life of a cowboy.

His Gun Was His Best Friend

A cowboy’s best friend was his weapon. In the old West days, a cowboy could not survive without a weapon, one that was easy to carry about and had multiple purposes such as protecting and controlling his cattle. The weapon of choice back then was the Colt.45 six-shooter as this could easily be carried on a belt and was easy to use. Life was extremely hard back then - if you owned some cattle, then you had something that others wanted, and you needed to be prepared to protect your assets at all costs. Therefore, the Colt.45 became like a best friend to the cowboys of the Wild West.

Being Able to Repair Fences was Vital

In the early Wild West days, keeping your fence intact was not much of an issue as a cowboy’s cattle used to just roam freely. However, towards the end of the 19th century, land rights started to come in being, and fences were erected. Homesteaders were given 65 hectares if they agreed to live on the land and improve it. As the land got divvied up, the competition for bits of land increased, and each ownership had to be protected. Barbed wire was invented in 1874 and cowboys made use of it to mark out their land. However, as free land dried up, fence cutting wars began. Thus, cowboys had to regularly go around their land and fix any cut fences to ensure that they kept the land given to them.

Had to Know How to Skin a Buffalo

Before the West was fully settled, there were millions of buffalo ranging across the plains. The Native Americans hunted buffalo and made use of every part of the animal. The hides were used for teepee covers, shoes, and clothes, while the horns were used to make ladles, cups, and to create headdresses. The fat was used to cook with and to make soap, while buffalo feces was used for fuel. The bones of the animal were used to make arrowheads, knives and even dice.

When the new settlers arrived on the plains, they also hunted buffalo, but they did not use the animal in exactly the same way. They mostly hunted for meat and hide. The hide was often used to make drive belts for their machinery, but they did also use it for clothes and bedding.

Buffalo meat tastes really good, which meant that come the end of the 19th century, they were almost extinct, with just 300 individuals left in the wild. Nowadays, thanks to conservation efforts, there are now about 500,000 in the USA and Canada. 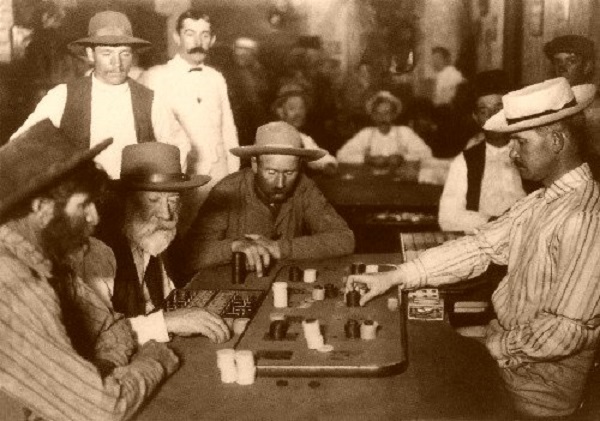 Every Cowboy Loved a Gamble

Gambling was a very popular activity for cowboys in the West, and this can be put down to the fact that anyone who left the comfort and safety of the East to seek fortune and fame on the frontier were, in a way, natural-born gamblers. Gambling was considered by many to be a profession as legitimate as being a clergyman or a doctor. Gambling was serious business and participants used to play with one hand on their gun and one hand on their cards.

Popular card games back then included the likes of Three Card Monte, High Dice, Chuck-A-Luck, and Faro. There was a lot of cheating going on back then, but it was a risky business because if you were caught cheating someone out of their money, there was a very good chance that you would end up with a bullet in your head. Therefore, it was usually a good idea to forget about trying to cheat.

Gambling is a lot safer nowadays as you do not even have to leave the comfort of your own home to do so thanks to online casinos. There definitely would have been far fewer dead cheats during the Wild West time if they had the option of playing online casinos from home. If you are into your gambling and do not yet have an account with an online casino, then we recommend you look into it as there are plenty of great online casinos out there that you can join. You will also be happy to find out that there are plenty of great cowboy-themed slots out there that have been developed by some of the best software developers in the game and this includes the likes of Gunslinger and Cowboy Treasure by Play’n Go, and John Wayne by Playtech.

Whenever you are gambling, please remember to do so responsibly. When you are no longer having fun, log out of your account and occupy your mind with something else. You should also consider setting yourself a budget and to stop gambling when you reach that budget. Gambling for a little bit longer and going beyond your budget is never a wise idea.

The Correct Way to Punish a Horse Thief

There are few things in life that mean more to a cowboy than his horse. Most cowboys have a number of horses to help them around the ranch. Horses were a very valuable part of a cowboy’s life, so if one was stolen, it was seen as a huge crime, even up there with murdering someone. The punishment for stealing a horse in the Wild West could be death. If they justice system let them off, then vigilantes would not. One story from Fort Griffin, Texas, tells the tale of a vigilante group that caught one man stealing a horse. They hung him from a tree and left a shovel under his body just in case someone wanted to dig his grave.