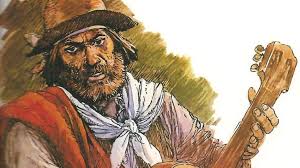 If you are not familiar with the gaucho story of Martin Fierro, then you are missing out on a piece of Argentinian history. The poem came first and later developed into a film of the same name and looks at the social struggles of the gaucho (cowboy) and how the story’s character became an outcast. But don’t worry, I’ve not seen it either, so let us begin a humorous assumption about what these seemingly two fine pieces of art offer to those interested in a world of social media and superhero movies.

We now escape reality and provide you a twist on the film made by Leopoldo Torre Nilsson and the poem by Jose Hernandez.

The film, based on the poem, tells the tale of a rebel cowboy named Martin Fierro and his like in Argentine Pampas a number of centuries ago. The movie portrays the cowboy being outcast by all sides of society. The alienation of the society around him didn’t make him think that perhaps a career chance was perhaps necessary to conform to more meaningful labor. Plus being a ‘rebel’ isn’t going to get anyone popular unless you’re James Dean (who have an expo about him in this museum, at the same time than this casino expo).

So, why is this one of Argentina’s most important stories? Well, it’s a retrospective of the times. You have a society trying to move on from its not so glamourous past and raise the spirit of its new-found independence. To be fair, given the circumstances, if some schmuck that has a rebellious attitude is going to get in the way of the many just for his benefit, then you can see why he wasn’t an everyone’s Christmas card list.

But are we missing something here, was the character the very symbolism of the argentine independence and that no matter what, society never will allow anyone to be truly free?

Deep stuff, but does it really all matter, you can glamorize, you can criticize but the fact is the cultural shift was never going to appease everyone and look where Argentina is today, pop Argentina into Google and hey presto, the football comes up first. We’re somewhat straying from the film, so a quick review: Angry man, misunderstood, some knife fights, no R-rated material, meh, it’s no Sergio Leonie masterpiece, but then this was a mirror to society, but then so is Keeping Up with the Kardashians.

If you are ready to read a 2500+ word poem then your nuts! I’m passing on this one, way more interesting things going on in my life right now, like creating mindless blogs (you’re welcome). If you want to learn about Argentina’s independence and the events surrounding the 1800s then this is a poem of great importance that managed to capture it all through the eyes of a character that gave up freedom and identity, saw changes in government, abuse and neglect and political arrest.

The book was translated into nineteen different languages, at the price of suffering to millions of children around the world that would have to study this for homework.

Four Famous Wild West Outlaws That Everyone Has Heard Of

In El Gaucho Martin Fierro by José Hernández, the protagonist becomes an outlaw when he kills a man in a bar fight, and he decides to go and live with the natives in hope of finding a better life. This story is now considered by many scholars to be a masterpiece of world literature, but Fierro is only a fictional outlaw. In this article we are going to take a look at some of the more well-known and real outlaws that plagued the Wild West.
read more

Martin Fierro, in Liliana Romero and Norman Ruiz’s animated film, is a gaucho, which is what the South Americans call a cowboy. Cowboys had to be hardy people and had to have plenty of skills to survive as there were few resources and little food. Cowboys back in the day often had a reputation for being bad people but they were not bad, they were just survivors. If you are fascinated by cowboys, then you are going to want to keep reading as we take a closer look at the life of a cowboy.
read more

Fierro, also called Martin Fierro: La Pelicula is an animated film that was directed by Norman Ruiz and Liliana Romero. Not many people will have heard of this film, but it is a movie that everyone should watch if they have some spare time. It was released back in 2007 and is based on the epic poem Martin Fierro, which was created by Jose Hernandez over a seven-year period. The Plot Martin Fierro, a skilled Gaucho (horseman), lives a very simple life with his family on a ranch in the Argentine Pampa.
read more

A Character Study of Martin Fierro: The Cowboy that Gambled on Freedom